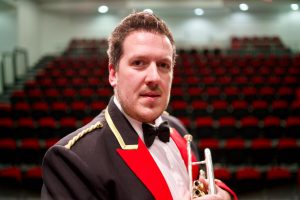 Daniel comes from the North East of England.  originally from the Middlesbrough Citadel Corps, where he attended, with his Family – Dad (Ian), Mam (Miriam), and Sister (Hannah).

Dan has been very fortunate in his school carrer.  his moth was the music teacher at the primary school and really pushed for a healtyh music programme there.  the school had it’s own brass band – -something that isn’t seen very much now.

His secondary education was at Egglescliiffe School and whilst there he was principal cornet of the 45 piece school brass band.  this led to him being able to perform in ‘Music for Youth’ and the National Brass Band Championships and gave opportunities to perform in numerous prestigious venues such as the Royal Albert Hall and appear on T.V. (Blue Peter).

Experiencing these moment and having the opportunity to play in brass bands at a young age, stamped a firm mark on his life, which paved the way to what he has become.

Dan worked as a freelance trumpet player which included working for The Royal Shakespeare Company (RSC), playing alongside the principal trumpet player Andy Stone-Fewings.  He played a number of well known Shakespeare plays but also ‘modern’ shows, his last one with the RSC being Matilda.  It was a great pleasure to play shows in Newcastle, Stratford-Upon-Avon and the West End.

He is now a Secondary School Head of Music in County Durham.  Dan is on the staff team regularly for the Northern Music School.  He is also very lucky to be on staff at Territorial Youth Band, where he has been for many years.  This is important to him as it’s where his love for SA music began.  Being able to still contribute to this week each February, after the impact it had on him, is a great honour.

Dan has been a member of Grimthorpe Colliery Band, Brighouse and Rasterick Band, Desford Colliery Band and Easington Colliery Band.  He has also had the pleasure of visiting Australia with the Cory Band.

Dan has been the principle of the Household Troops Band of the Salvation Army since 2007 which makes him the longest principal cornet player the band has had to date. 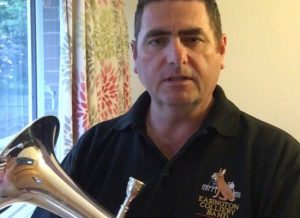 Started playing cornet at the age of 12 in the neighbouring village with Seaham Town Band and moved on to Soprano Cornet after a year, a position he held for 4 years until the Tuba beckoned and he realised he was never going to make it as a Sop player.

After several years, Jonathan started on Tenor Horn when the Solo Horn seat became vacant, an instrument he has excelled on.

Johnathan had to leave Easington for a couple of years in 1999 when he moved to Scotland with work, where he joined the Whitburn Band back on Eb Bass.

On moving back south, he rejoined the band on Solo Horn once again and it wasn’t until a few years later that he took the decision to move on to Cornet as 2nd man to the legendary Dennis Todd.  When Dennis left for health reasons, Jonathan took on the Principal chair for a year until our current principal cornet player (Danial Robson), joined.

Johnathan is now back on his treasured Solo Horn chair but still misses the cornet.  He often switches back to cornet at Christmas time for the many carol playing engagements we have.  He has also occasionally played Bb Bass but more regularly the bass drum for Durham Miners Gala and the Remembrance Day parades.